As a semi-recent hire of Bear Down Podcast — unquestionably the preeminent Bears comedy podcast on the internet — I thought it might be in my interest to help solve the escalating Forte problem/ensure Chicago maintains a formidable team* for 2012. 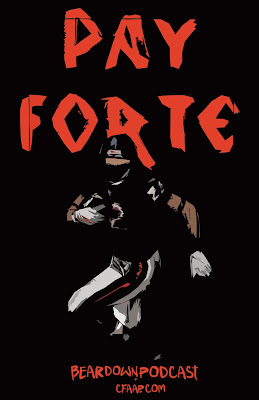 It’s not that Michael Bush isn’t great — both at football and at improv — it’s just that Matt Forte is better. And as most football types seem to be opining, Matt Forte also deserves better.

“Everything they’ve asked, he’s done,” said even the incoming Bush of the Bears and their star runner. “But that has nothing to do with me.”

Three days ago, Forte refused to sign his franchise tender…which means that right now — at least contractually — he’s not a part of the team. If someone doesn’t step up to the plate with relative haste, this thing has the potential to drag on into training camp.

So here’s my second suggestion… 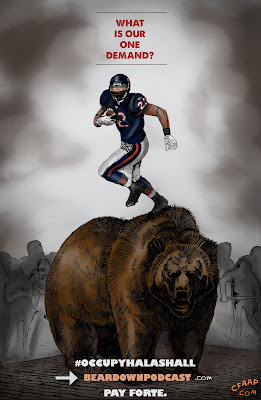 Nobody has to get hurt (and people will be allowed to take showers this time), but how ‘bout we cause a ruckus Chicago?! As soon as the Bulls beat the Heat in the playoffs and all of Chicago (and Cleveland) can rest easy, how ‘bout we turn our attention to Halas Hall?

Matt Forte is one of the more consistently productive backs in the league + a perfect fit in Chicago’s presumptive Ticeian offense.

Let’s make sure he knows that.

Also, let’s make sure we listen to Bear Down Podcast.

It’s awesome + I get a free burrito if you mention this article via Twitter. (TWEET THEM HERE!!!)

Do it. (Maron inflected.)

A Browns fan who likes the Bears for work (and in truth, actually kind of came to like them anyway!)

(*My “Brown Out” podcast is the lowest rated audio entry on iTunes. Thanks Holmgren.)

(PS- I've just been informed that it’s POSSIBLE I’m not the first one to think of this “Occupy Halas Hall” thing… so a quick shout-out to the literally 10,000 similarly titled Google search results people whose idea I stole.)

By Ryan + Aron, for BearDownPodcast.com. (BDP is also available on iTunes and Stitcher. I'm really good at my job.)