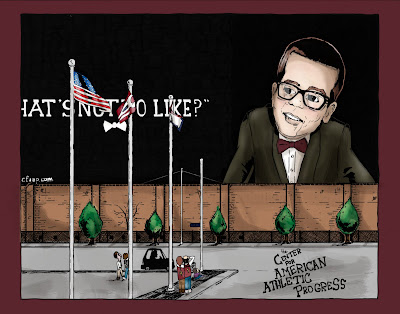 NBA Draft Lottery: What’s Not To Like about Nick Gilbert and the Cleveland Cavaliers?

Welcome to week two of the Bleacher Retort, a.k.a. Ryan’s first foray into the world of architecture and banner design, a.a.k.a., unprecedented streak of employment.

Also exciting? What happened Tuesday night to the Cleveland Cavaliers.

As you may or may not have heard, three days ago now, the Cavaliers won the NBA draft lottery in a big way by scoring the numbers one and four picks, which is a pretty good haul.

Even better was that they did this on the back of one of the more likeable draft day representatives in recent memory—14-year-old Nick Gilbert—the owner’s son, the Ambassador for the Children’s Tumor Foundation, and the sole reason I chose to wear a bowtie while typing this entry.

Not much, Nick Gilbert. Not much.

Thanks to you, Kyrie Irving is heading to Cleveland, and someone else of note will not be far behind.

Probably should have asked this first, but…do you have any idea who Nick Gilbert is?

Take the poll! ---> (Editor's note: The pole is sadly unavailable on this site.)

It has recently come to my attention that the resulting and semi-well-chronicled Ryan Braun Cleveland bias may have again trickled its way into my work, in part contributing to the assumption that the Cavaliers winning the draft lottery was the seminal event of the week, and thus, the event most worthy of chronicling via cartoon.

Should you be one of the hopefully few/probably many who aren’t up to date on all things Cleveland, next week we’ll be a going a little more mainstream. Potentially even touching on something familiar to more than 10 percent of the population.

Ideally, I'd like to find a way to tie together LeBron James, Chris Nolan, Barack Obama and the Debt Ceiling, but nothing's come to mind yet.

And again, thanks to the inimitable colorist AJS, who did some pretty great work on this picture.

PS -The actual picture is a bit larger then it appears on screen. I think you can drag it onto your desktop and it becomes bigger.

PPS - This (below) is a picture of my brother and me watching the lottery unfold, and I think it captures the feeling of the room quite nicely. 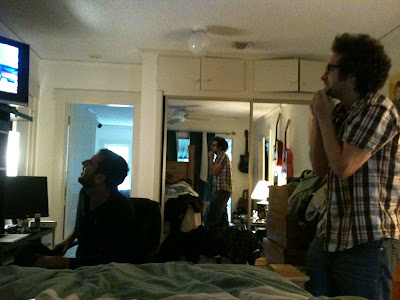 PPPS – I actually sold one copy of last week’s cartoon. This is officially an enterprise.

PPPPS - It was my mom who bought the picture, and in case you were wondering, she bought the discounted autographed version.