Ryan Braun’s 2012 NBA Season Preview One Week Into The Season:

Ryan Braun’s NBA Season Preview was originally posted about three months ago (see:previous post), and thus it may be just the wee-est bit dated.

The advantage to backlogged predictions?

The chance slash opportunity to publicly gauge their accuracy.

The following was posted January 1st, 2012 on Cavs: the Blog. In defense of my Samardo Samuels as “poor man’s Jared Sullinger” insight… I never said how poor.

Happy New Year everyone! Welcome to the year’s first installment of what was (and may soon be again if I can’t think of a better name) Drawings from the Notebook of Chris Grant. 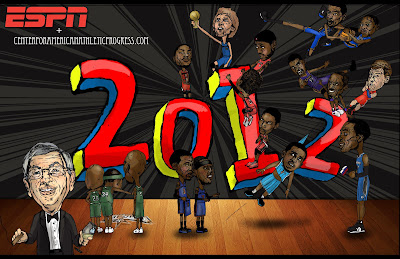 "Where did all the pictures go?" - at least one person

This year, we’ll be trying something a little bit different — a league-topical cartoon (vs. a purely Cavalier one), plus some accordant sentiments on whatever the topic was that seemed cartoon-worthy. And that will be posted every Sunday morning.

This week’s accordant sentiments — as dictated by our picture — just a general look around the league. Notes and observations through one week of play. I promise this will get more interesting.

Here is what I’ve gleaned so far:

Notes on the Cavs specifically:

AWARDS WATCH ( 6% of the way through the season):

CAVALIER MVP – Andy Varejao, PF/C. God, is it good to have him back. Andy is the best thing Tristan Thompson has going for him.

NBA COY– Erik Spoelstra, Miami Heat. For getting so much out of so little. If Miami wins 56+, it’s his. That said, by the end of the season, I think George Karl, Nate McMillan and Monty Williams will all have a shot at it.

CAVALIER COY – Byron Scott. Barely edging out Mike Krzyzewski. I worried a little early about Byron being perhaps a bit too eager to make the rookies “earn it”…but I’m feeling pretty good about everything now.

NBA ROY – Kyrie Irving, PG, Cleveland Cavaliers. If the voting ended today, I think it would be close (and maybe Rubio would get some kind of a publicity boost) …but no rookie is really shouldering the same level of responsibility as Kyrie right now. And game one aside, he’s been handling it pretty well.

CAVALIER ROY – Kyrie Irving, PG. Tristan’s been strong (I love the way he runs the floor at literally every opportunity—he’s not gotten the ball once yet, but someone else always comes open as a result), but again, Kyrie just has so much more to worry about. If Tristan can become “smart Josh Smith” within three years, we made out.

Enjoy the game tonight! Big test for Kyrie, not so big test for everyone else.