Rick Santorum on Abortion and the Gay Fetus Conundrum:

My thoughts on Rick Santorum are many, and I hope that espousing a few of them won’t permanently destroy my standing in Ohio. 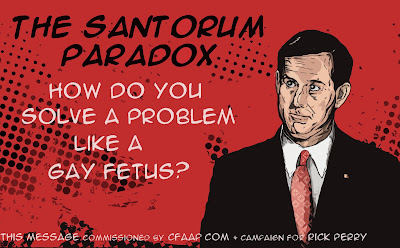 I am not a hater.

Which — the latter intersection of philosophies — presents an interesting conundrum:

Which book is more important to Rick Santorum?

More specifically, which writing/value-set should be considered more important when evaluating the character of a presidential candidate?

Let me throw a hypothetical at you…

If we’re being honest, I think a serious candidate would have to accept.

And that’s the question I’d ask Rick Santorum if I had the platform.

That's the question I'd ask any of the candidates.

And so ends the first cogent blend of economic principle and sodomy. 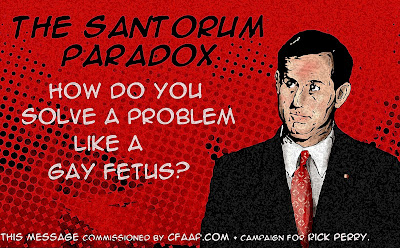 By Ryan + Aron, for the Center for American Progress Illustrated.
Posted by RYCOTA BRAUN at 5:00 PM