The most notable member of the world’s leading private, alternative asset management firm has an image problem, and I’d suggest to his campaign that it’s all about perception. 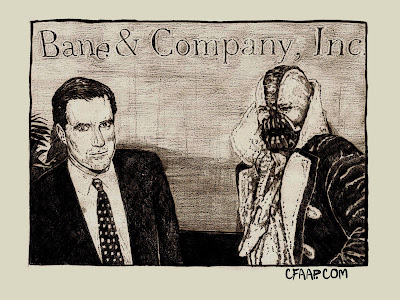 Mitt Romney worked for a Bain enterprise that dissembled vulnerable companies for profit, but he also worked for a Bain enterprise whose timely investments saved Dominos, Dunkin’ Donuts and the Burlington Coat Factory — the latter of which supplied Bane’s wardrobe in The Dark Knight Rises, thereby scoring Mitt a massive political boon in the form of a role in the upcoming blockbuster (“Sinister Accountant” for The League of Shadows).

In short, informed advisor that I am, my advice to Mitt Romney would be as follows…

Make yourself more than just a man by devoting yourself to an ideal.

Because then… you become something else entirely.

(Feel free to use that in your campaign.)