Luke Harangody on XXL, from Cavs: the Blog:

The following contains both a tribute to and a musing on Cavs PF Luke Harangody.

Here is the tribute: An illegally procured copy of XXL’s new LH cover. 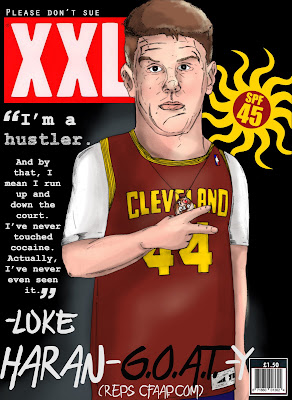 Initially, I’d planned to make cover art for a fictitious Harangody rap album (tentatively titled, “SPF-44”), and I wrote the following faux-review excerpts to paste on the cover:

-“I bought this in a grocery store parking lot.”

I couldn’t fit them all in and so I went with the magazine.

Okay, now for the musing.

I read and loved Kevin’s excellent series on Cavalier “Diamonds in the Rough,” and if I valued having an honest relationship with myself, I’d probably go ahead and admit that I think he’s right in his assertion of Luke Harangody (In case you don’t remember, it’s: At best, a “starter for a second place team in the German League.” Which is harsh, but fair. The German League places a premium on undersized, un-athletic 4’s.).

But since I traditionally lie to myself to suit the needs of any individual moment, here’s one potentially more optimistic stance/comparison that I think is somewhat grounded in reality.

Luke Harangody is Brian Cardinal; he’s just too young for us to see it yet.

Cardinal, the funnily shaped, self-deprecatory, 34-year-old 10th man had so little “legacy” invested in a Finals win that it ultimately enabled him to perform with surprising effectiveness if only because he was one of the only guys on the court unaffected by the magnitude of the moment. He didn’t win the Finals (he played 30 total minutes), but he helped.

Is it possible that all Harangody is missing by way of comparison is the self-awareness that comes with being a bit-player for 11 NBA seasons?

In my mind, the number one most incriminating Harangody statistic is his current 38.4% shooting percentage. Not good for an interior player.

The key note to take away is that while 40% shooting from a power forward is bad, it doesn’t hurt as much when he’s only taking three shots a game.

With his unique combination of toughness and self-awareness, Brian Cardinal has quite probably now affirmed his status as the best 10th man in basketball.

I believe it’s possible that we’ve found someone similar, we just need to let him age. (And also, maybe send him to the Groundlings. Brian Cardinal is funny.)

(Picture by CFAAP.com and colors by AJS.)